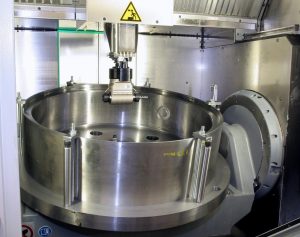 The outer part of the circular component requires complex features to be machined around the inside circumference, while the outside of an inner section has similar milled features.

The only way to access the inner surface of the 780 mm diameter component was to set it up on the rotary table of the 5-axis machine and rotate it while employing a milling cutter in a right-angle head held in a fixed position in the spindle. Other components produced on the Hermle include stainless steel brackets and complex aluminium components such as aero engine housings.

It was back in 2002 that Burcas first became involved in aerospace work. In 2005, Mr Burrows went on a trade mission to Japan and came back with a 10-year contract to produce actuators for the Airbus A330, for which purpose he bought another, even larger mill-turn centre. Further related business has since been won for producing lower side stays for the same aircraft. Burcas continues to build the aerospace side of its business and already has approvals from GE Aviation, Messier Dowty, Bombardier and Goodrich. Now, 40 per cent of its £5 million turnover is related to aerospace subcontracting and the intention is to double that within the next few years.

Particularly when machining tough materials like stainless steels, Inconels and titanium alloys, there is no substitute for choosing the kind of quality that is built into machines like the Hermle. Having such plant on the shop floor impresses customers and helps to win new business.